2020 - Another Great Year for the Cassette Tape?

You've likely heard about the recent resurgence of vinyl records over the past few years, but you'd be forgiven for not having heard that the cassette too, is making a comeback. Just like vinyl, sales of tapes have increased year on year in Europe and North America since the mid 2010's. In comparison to records, sales of tapes has been much smaller, but there are a variety of reasons why this fad is far from peaking, and why 2020 will be another great year for the return of the cassette.

The compact cassette made its debut in September 1963, with its creator (Philips) releasing it originally as a dictation format. Improvements to quality soon prompted music sales to arrive on tape in late 1965, with cassettes eventually taking the lead on vinyl record sales in the 70's. With the release of the CD, cassette sales fell back in the early 90's and were all but gone by the mid 2000's. All but the most hardened Tapeheads abandoned the format for the superior quality of the CD, and streaming services like Spotify.

References of the cassette in popular films and TV almost certainly sparked the beginning of the revival. Guardians of the Galaxy hit cinemas in 2014 and featured a soundtrack played from a mix tape. Demand for the soundtrack on tape was so great that Disney actually produced a cassette version which is still selling today. The concept of a mix tape is something never experienced by the youngest of generations, and that joy of recording your favourite tracks from the radio or a CD into your own mix is something you simply cannot feel when creating a digital playlist.

The Netflix hit "Thirteen Reasons Why" featured a plot that revolved around cassette tapes and a Walkman player, ultimately sparking a new interest in its young viewers who had quite possibly never even seen a portable cassette player. The first season of this show released in early 2017, with cassette sales booming as a result. For older viewers the nostalgia of Walkmans and tapes has undoubtedly fuelled the resurgence. On the other hand, for younger viewers who have only ever known streaming and MP3 formats, having a real item in their hands that can be recorded onto, traded or shown off in an Instagram post is a new and unique experience.

What can Tape Offer me?

What makes tapes desirable in an age where Spotify or Apple Music can deliver high quality, hiss free music that's available on your phone or laptop? It certainly isn't down to the quality of the audio or convenience, but rather falls down to the way tapes were used in the past, or the nostalgia associated with them. Tape has a few unique advantages over almost any other physical format in existence, and these usually outweighed the disadvantages for the most part.

Easily the most exciting and useful function that tape offers is how simple it is to record your own audio onto one. Rare demo tapes from bands, undiscovered music, recordings of long gone radio stations and the voices of deceased loved ones are just a few of the things discovered on tape. Imagine rifling through a stack of old tapes you bought at some car boot to discover an unheard demo from a famous band or a bunch of jingles and adverts from a time before you were born. Tapes were also widely used to store computer programs in the 80's, and so its not unlikely to find old games and code for machines like the ZX Spectrum or Commodore 64 tucked away in a dusty box. It was almost impossible for the average person to make a recording onto vinyl records, meaning collectors of tapes often find unique treasures that a record collector could never dream of discovering. Even recording to a CDR is nowhere near as simple as dropping a blank tape into your old boom box and hitting record.

Another win for cassettes was their affordability and convenience, being far cheaper than other formats right up until the near end. Being far smaller than any record, they were the ultimate portable format. Only in the early 2000's did it become cheaper to buy music on Compact Disc, and iPods & MP3 players took over the portable market. The low cost of cassettes made them easily affordable and the small size meant you could play them in your pocket, car, or on your Hi-Fi unit at home. Their low price continues to this day, with current albums released often being very expensive on vinyl, while tapes often cost little more than the digital release (and often include a digital download link to sweeten the deal).

Quality has always been the biggest disadvantage to tapes, with some sounding positively dreadful in comparison to other formats. Sadly this issue was only made worse by recording houses, who would use the cheapest types of tape and techniques to mass produce cassettes for the lowest cost. However, using decent type II tape, Dolby noise reduction and a good quality recorder, it's possible to get recordings nearing that of CD quality. Analogue enthusiasts who shun digital media of any sort often record their vinyl albums to a tape, as they are far more durable than a record and much less expensive to replace if damaged. 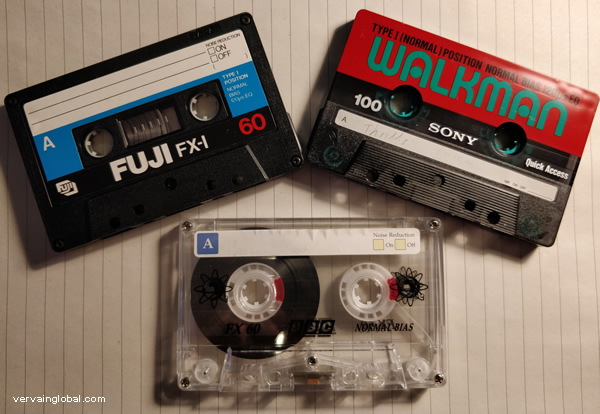 With the nostalgic element of cassettes alongside their durability, affordability and ease of manufacture, it's inevitable that they will continue to grow in popularity over the coming year. Thanks to vast amounts of second hand tapes and playback equipment in ready supply from the last 60 years, its a relatively affordable and fun hobby to get into. For those not wanting to deal with the headache of servicing and checking over second hand equipment, there are new tape decks and portable players being manufactured and sold to help fuel the resurgence.

A recent Kickstarter project by the name of IT'S OK combines a classic cassette player with modern Bluetooth connectivity for those who want to enjoy tapes without the hassle of hooking up old fashioned decks and Walkmans. Large companies like Sony have also begun production of new boom boxes featuring a cassette deck, making access to the old format easy and convenient.

For the more experienced and knowledgeable, the route of buying second hand equipment is a viable option. Hi-Fi tape decks built in the 80's and 90's boast some of the highest quality recording and playback abilities, but may require servicing and on-going maintenance due to their age. Most tape decks make use of rubber belts and rollers to move the tape, and in older machines these often perish and require replacement. Some companies have gone into business restoring these machines and selling them on. For the more technically inclined, it's not so difficult to replace the belts and pinch roller yourself provided you understand what you are doing and have the necessary tools.

There is no doubt that tapes are making their way back and are here to stay. More and more artists are releasing their content onto cassette each year, and manufacturers are investing money once again into cassette players and recording equipment. Like vinyl, they bring back memories of a simpler time, when the warm and gentle sound of analogue reproduction added to the enjoyment of listening to your favourite music. Being able to physically hold your cherished songs is a joy that has long since been lost in the era of digital music. Despite this, it's clearly something that many want and are willing to sacrifice the merits of on demand streaming for. The only real question left is; What cassette will you be buying this year?

If you'd like to learn more about cassettes as a format and how they work, there are a variety of resources available. I'd recommend you visit Techmoan's website and YouTube channel. He covers almost everything you'll ever want to know about cassettes, as well as other formats like 8 Track and Vinyl. I'd also recommend the YouTube video 13 Reasons Why Cassettes Are Cool Again by Vwestlife, which offers examples of the quality available from cassette amongst others. This video helped spark my own interest in Cassettes, of which I own many from my early childhood.

I hope I've been able to inspire you to dig out your old Walkman or boom box and dust off your old tapes, or even go out and buy a new album. If you enjoyed this article, please consider sharing it with your like minded friends on social media.