Matrix lets you take full control of your communications! It's a secure, open source & decentralised chat platform that uses strong end-to-end encryption and can transfer almost any type of media. We're hosting a "homeserver", one of many decentralised nodes that facilitates free and uncensored chat around the world! 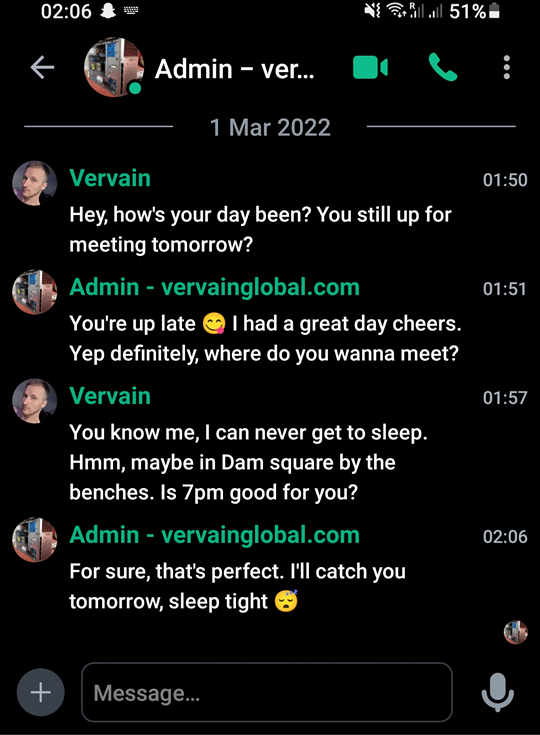 Put simply, Matrix is a system used to send instant messages, images, videos and much more between users. It takes the best parts of modern messaging apps and pairs them with the freedom to choose who hosts your data, or better yet, the ability to host it yourself! Matrix supports chatting across different servers, so if you and a friend sign up to different services, you can still message one another! It's kind of like how you can email your friend who has a Gmail account even though you're using Hotmail. This awesome feature is known as federation.

Messages are end-to-end encrypted, just like with other chat apps. This means nobody except the people in the chat are able to decode the messages sent. With Matrix, you pick a username of your choice, so there's no need to hand out your phone number or email address. Much of Matrix is focused on being easy to use, private and resiliant to outages. Some servers even support a feature called "bridging", where you're able to link Matrix to other existing messaging platforms. People are using this clever feature to consolidate how many messaging apps they need on their phone.

A Choice of Home

With Matrix, you get to choose where your data lives. This is different to major chat apps like WhatsApp or Telegram, where you're forced to use their central and proprietary servers. If those central servers suffer an issue, your chatting stops. With Matrix, if a server goes down, the rest of the network just carries on happily. Matrix also addresses a lot of the privacy worries that are coming out of the woodwork with the biggest chat apps. Most big Matrix servers are hosted by non profit companies that put privacy first, like Mozilla (who makes the Firefox web browser) and Halogen City, who are dedicated to running a secure and private space to chat in.

For those who really want to take control of their data, it's possible to host your very own Matrix homeserver! Running your own server means messages sent between you and friends on that server are wholly owned by you, and are visible only to you and them. No big company is able to see your data, or sell it off for their own profit. Federation to other servers is entirely optional, so if you want to keep your server private for just you and others you've invited, you can do so.

A really cool feature of Matrix is you don't have to use one app that's forced on you, unlike most chat services. It's like how you could choose from Outlook, Gmail or a variety of other apps to access your email. Matrix has apps that behave like your favourite chat app, or apps that are like Discord or Slack. There are even apps that are being developed for accessing the metaverse over Matrix.

There's a lot of different apps out there, each of which aims to achieve something a bit different. Some are very easy to use, and others are for more advanced users or developers. For those just stepping into the world of Matrix, consider trying Element or FluffyChat. These are well developed apps that let you get straight to chatting. Element is the most common app used as it has lots of great features and is simple to understand. FluffyChat is also very user friendly, has very similar features to Element (as well as a few of its own), and focuses on being very private and simple to use. Both are available on Android, iOS and desktop OS's. No matter which app you choose, all share most core features with one another, so you can still communicate with friends using a different app.

For those wanting to host their own chat server, there's even a choice of different server software to choose from! Generally though, most still recommend using the Synapse reference server, as it's designed for everyday use and has the most stable working features.

We launched our own homeserver in October 2021! The server uses the popular 'Synapse' software to support the most recent stable features. A small group of friends have been using Matrix as our day to day chat app, and we're pretty impressed. As of now, our server is invite only, as we are still testing it out and making little tweaks here and there. At some point in the near future, when we are happy that the server is reliable and ready for heavy use, we may open up registration for new accounts to the general public. Our server is home to a small group of trusted members who mostly chat amongst themselves. If you know someone on the server, ask them for an invite!

For anyone who wants to know more about Matrix and would like some friendly advice, or needs to reach out to our server admin, you can contact us via Matrix at @admin:vervainglobal.com

If you'd really like to dive in to Matrix and get to grips with the protocol, check out their website at matrix.org. The protocol as well as many of the clients and server packages are still being developed and added to, so new features often pop up on the platform. As Matrix is open source, developers are able to work on the project directly, or create clients, servers, bots and bridges that interact with the protocol.