This article runs over the basics of generating and storing electricity for use as a stand alone or emergency back up system. It uses commonly available parts, and anyone can put such a system together if they so wish. Many parts can be found second hand, or bought cheaply.

On the national grid, electricity is generated as needed. If lots of people turn their TVs on, more generators are started. But for us and our solar panels, if we need power at night time, we will have to store that energy collected during the day. For that we have batteries. Most all of us will be using lead acid batteries. These dirty, ugly heavy things are based on outdated technology and are finicky about how they are kept. Unfortunately, unless you want to shell out vast amounts of money for Nickel Metal-Hydride cells, or a hydrogen fuel cell, lead acid batteries are your only realistic option. With a little knowledge and know how, you can make these old batteries work for you with little fuss. 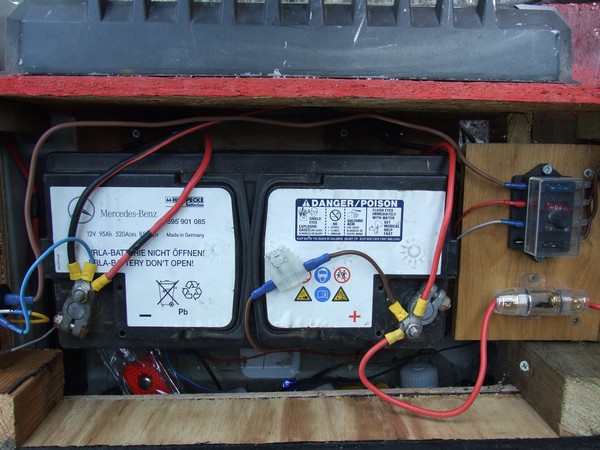 First of all, I must strongly advise you NOT to keep lead acids in your living space. They are dangerous in the wrong situations, and children must never be allowed to touch them. Store them in a shed or out building if possible, and ideally put them in battery boxes. If you can get your hands on "gel" type or "VRLA" batteries, please do so. These batteries have a gel like substance in the place of regular acid and water, so are not so dangerous if accidentally tipped over. All batteries should be kept on a sturdy surface, and out of reach of children and animals. New batteries can be expensive, so second hand may be preferable. Often, you will be able to beg a mechanic at a garage for an old battery. There is much debate on whether so called "deep cycle" batteries are better than the ones found in cars, but well looked after batteries will last you many years no matter what the type.

Looking after your batteries

Lead acid batteries have a reputation for being picky with their maintenance and upkeep. In reality, they are not at all difficult to look after, as long as you know what needs they have.

How much power can a battery store?

On all lead acid batteries, you should find a sticker or a plate with details on it. We are looking for a number followed by the "Ah", which stands for "Amp hours". Let's say your battery is rated at 50Ah. What this means is that if you were to draw a load of 50 Amps from the battery, it would be completely dead in one hour. Or, you could draw one Amp from the battery, and it would last 50 hours. If you were to draw 10 Amps, it would last for five. However, it is important to remember the rule about only using upto half of the batteries capacity. So, if you've got a 50Ah battery, you'll want to stop using things when 25Ah of it's capacity has been taken. If you had two batteries that were the same voltage and had a capacity of 50Ah each, you could wire them together in Parallel and the total capacity would now be 100Ah. Having an Ammeter connected between your battery and load will allow you to see how much current your appliances are drawing.

An inverter is an electronic device that turns the low voltage Direct Current from your batteries into high voltage Alternating Current, like that supplied by the national grid. These devices have the difficult job of chopping up the batteries' DC current, bringing it up to a high voltage, and then forming it into a clean and usable Alternating Current. Because it's a bit of a difficult task, inverters are generally pretty expensive. Small models that plug into a cigarette lighter socket (like in your car), can be found for a small price. These only have a very low output rating, and would struggle to run anything more than a couple of lights or a laptop charger. They also produce a poor, noisy waveform, and will make most sound equipment hum.

Not all equipment can be used with a regular inverter. These cheaper inverters produce a square waveform, which is quite different to the sine waveform found on the grid. Equipment like induction motors and fluorescent lighting will struggle to run on a square wave inverter. If you need to run something like this, or want to use sound equipment without the irritating hum, you'll need to invest in a "pure sine wave inverter". These are expensive, but they do produce a pure waveform like that of the grid, and can run all types of equipment. When buying any type of inverter, carefully check its output rating. This will be in Watts. If you want to run an appliance that is rated at 400 Watts, your inverter must have a rating of at least 400 Watts or greater. Trying to run powerful equipment on an under-rated inverter will likely blow it up, so unless you have the money to waste, it's not advisable.

Running an inverter will pull A LOT of current from the battery. If you are running a 400 Watt load from the inverter, you will be draining your 100Ah battery bank in an hour or so. If you wish to run powerful loads from intverters often, a well designed solar setup or wind turbine that can recharge the batteries quickly will be a worthwhile investment. In time, the equipment will pay for itself, and begin generating you free electricity.